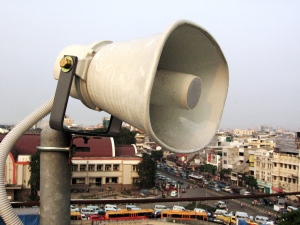 I’ve not been arrested. I’m not corresponding from a cold damp rent-free cell. Nor do I have a couple of pots of Fortnum & Mason’s jam – sorry, conserve – in my larder plundered from the famous store, sadly. The reason for all these circumstances is that I was unable to join the thousands marching through the streets of London a couple of weekends ago in protest to the government’s swingeing cuts (I was too busy contributing to the Big Society elsewhere that day). Had I been able to march, I would have joined the hordes gathered outside the RCJ and Sounding Off For Justice.

If you’re not familiar with the Sound Off campaign, let me fill you in. The campaign is aiming to gather widespread support to make it known to the government that cuts to legal aid are not welcome and must not be effected. Supporters are invited to sign the petition, write to their MPs and ‘sound off’ in a short audio or video recording that will be interwoven in an audio-visual tapestry and presented to the Lord Chancellor, Kenneth Clarke QC.

The campaign promises famous faces, lawyers and opinion makers. Thus far, the only recognisable people are Michael Mansfield and a couple of Gurkhas, but I’m sure notable lawyers Stephen Fry and Martin Shaw are in the Law Society’s studio right now…

The potential and perceived threat to justice is the fundamental right that the campaign is aiming to protect. But is justice still a concept that the law and the British public understands, respects and deserves?

It is a fortunate coincidence that the BBC is currently rolling out a series of programmes with justice at the centre – if somewhat loosely. I’m certain that most of you will not have had the fortune to enjoy the new BBC1 daytime drama bravely taking Justice as its title.

To save you a few hours, I’ll bring you up to date. Unlike Silk, this is not primetime TV and so doesn’t have the primetime budget – it is therefore set in Liverpool. Nor does it have a stellar cast, but a collection of scouse mainstays – former Brookside neighbours and old Ma Boswell from Bread (up to episode 2, no sign of Jimmy Corkhill but we can only hope). At the centre of the action is a new Public Justice Centre and a maverick judge with a local – currently secret – past and tasked with bringing compassion and rehabilitation to the community.

Rather than the stereotypical Jaguar, Judge Coburn has already been spotted cycling round the estates on a BMX ‘borrowed’ from a local delinquent. He has even been smoking in his courthouse chambers. Most worrying though, is the fact that Judge Coburn and his right hand man seem to do the work of the police, the CPS, the probation and social services put together – and rewrite the law as they do it. As an employment lawyer, I was particularly surprised to learn that the judge had powers to hire, fire and promote court staff.

Elsewhere in the justice season has been See you in court, an insight into the defamation laws and those affected by them. Up first was everyone’s favourite ex-cheeky boy, Lembit Opik, whose claim of libel was founded on his belief that he was removed from his parliamentary seat by the voters because their view of him had been warped by the unfair coverage he received in the press. Primarily in his sights was The Sunday Times, which had declared him to be “a guitar-strumming Estonian loon” among other things.

Somehow Mr Opik had convinced a solicitor to take on his case pro bono, but, when a barrister soon pointed out that none of the allegations were in fact libelous but opinion, albeit hurtful, and he would be presented with a legal bill and risk of paying costs, the case was dropped.

Justice at a price

In the same show, we also followed former wife of Paul Gascoigne, Sheryl, and her emotional battle was with the tabloids that routinely vilified and publicly persecuted her. When it became too much to take, she was forced to put her luxury home on the market to fund the legal action, ultimately winning damages and settling on comp-ensation much lower than the financial cost. But she succeeded in clearing her name and, in this case, some sort of justice was done, at a price.

Justice is a moveable feast. It’s an uncertain ideology. It is subjective. The problems this country is facing – not least economically – can often be traced back to our historical beliefs in a just and fair society – in right and wrong. What the thousands of people marching through the streets of London for was a sense of justice. For fairness. And, above all, some honesty from those who are serving us, elected to protect our beliefs and deliver on them. As lawyers, we are in a prime position to do just that, even if it doesn’t make good TV.

This article was first published by Solicitors Journal on 12 April 2011, and is reproduced by kind permission