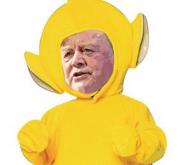 There’s been a lot in the news in the past month about Ken Clarke. Formerly the bedrock of the coalition government, he now appears to have become the fall guy – put out to provoke the public and move attention away from more salacious stories of corruption, sex scandals and driving dilemmas.

It was his turn though. Nick Clegg’s been through it and the other former ‘safe pair of hands’, Vince Cable, has already sold out on university tuition fees, becoming the hate figure for hundreds of thousands of students and parents. Anyway, only a week or so after the now infamous distinction between real and proper rape was made, I met Ken Clarke to put to him some questions about the future of the profession and his part in shaping it.

The Ministry of Justice is based in a 1960s concrete cathedral just around the corner from the three pillars of the British legal system: the Houses of Parliament, the Supreme Court and New Scotland Yard. But as I met the Lord Chancellor, just at the end of his first year as secretary of state for justice, he seemed to have only one thing on his mind – a mirror.

Not especially known for his vanity, but aware that there would be a camera focused on him for a half hour or so, he began hunting around the (quite frankly, disappointing) media ‘suite’ looking for a mirror. He was not able to find one.

It was down to some gentle reassurance to get him in to the hot seat and start the questioning. I’m sure David Frost didn’t go to this much trouble. Fortunately for me, far from being a Nixon (or even a Meg Ryan) he was as affable as hoped for and surprisingly keen to provide comment.

With two ministry employees cross-legged on the floor, two cameras, two cameramen and a sound man hovering nearby, the interview commenced and the chatter flowed freely. If only I had known in advance that the same morning he had appeared on the front page of The Sun dressed up as a Teletubby (I am reliably informed it is Laa-Laa but welcome correction) alongside the headline ‘Time for tubby bye bye’.

Things were going well. I disagreed with him on a few points – mainly around the number of legal aid lawyers being far in excess of those required to fulfill the role – and we merrily talked on, my confidence growing as we went.

Ably dodging the questions I wanted to ask with a reference to a “flurry of nonsense in the past few days” I was happy to receive assurance that, despite the likely revision of sentencing guidance to reduce prison overheads, there would be no further cuts to the legal aid budget other than those already announced. Great, I thought. News was actually being made here.

Keep calm and carry on

Following up with some of my own curiosities (he’s not been to Ronnie Scott’s for a while and now prefers a good dinner with friends; he doesn’t just drink bitter, but “any form of alcohol known to man – except lager” and he didn’t apply for Olympics tickets), we were done. He was whisked away into the bowels of the ministry and we were left to clear away the cameras as his press secretary cleared up a few quotes. The video is now online – not having reached viral status at the time of writing. I hope you’ll agree, Ken’s hair looks very neat.

Some people may say I wasn’t hard enough on him. Some people feel so strongly they can’t abide to look at him. But, despite the strength of feeling in the legal press, the ‘slap in the face’ legal aid cuts are said to be for ‘normal folk’, I have a new-found respect for a man who tells it how it is, takes the punches and carries on doing a job that few would envy.

I’m writing this as I contemplate what I will say to him should I bump into him at a reception happening later at Number 10. The prime minister has requested the pleasure, and who am I to refuse? It’s a reception for members of the LGBT in the run up to the annual Pride celebrations – which are taking place over the weekend, on 2 July, after this article has gone to press – I will keep you posted.

This article was first published by Solicitors Journal on 1 July 2011, and is reproduced by kind permission