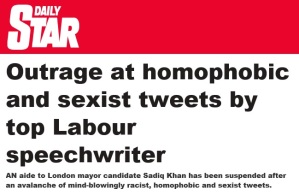 A former law student and parliamentary office worker has resigned his position after a newspaper published tweets dating back up to 4 years.

Shueb Salar worked as an aide to London Mayoral hopeful Sadiq Khan since 2014, but was suspended following the publication of a story in the Mail on Sunday detailing tweets he is alleged to have posted whilst he worked for Khan and in the years before. He resigned from his position, where his duties included “assisting in the drafting of speeches, reports, press releases, briefings, parliamentary questions, letters and email correspondence” a day later.

Although the content of the tweets was not illegal, many could be described as distasteful or offensive, using misogynistic and homophobic references. Other comments appeared to suggest that the Woolwich attack on Lee Rigby was faked. Further images from Instagram were published in the London Evening Standard, showing Salar posing with a gun on a shooting range with the taglines #I’mASecretHitman and #ShoutMeIfYouWantMeToTakeCareOfSomeone and #I’llMakeItLookLikeAnAccident.

The story has led to a wider conversation around what action employers should take when considering an employee’s use of social media. I joined presenter Lisa Aziz and Barrister Sophia Cannon on the LBC Breakfast News show to discuss what happened and how we should deal with misconduct.

It is worth noting that Salar was only a junior employee, most likely with little influence over his employer – political or otherwise. When employers are considering social media misconduct, the status, position and profile of an employee should be taken into account.

Similarly, the size and make-up of the employee’s social media following or connections should be considered. Salar’s Twitter account has since been removed so it is impossible to say how large his following was – both whilst in employment, when the comments were made and who they were made to.

This raises a further question, less to do with the employee and more to do with the furore that has been caused as a result of Press interest. Is a parliamentary aide a high profile public figure and is this news story in the public interest? Regardless of the misconduct on social media, the front page news is a secondary issue that must be considered.

For most of us, our lives, jobs and relationships are insufficiently interesting to warrant hacks spending days trawling through thousands of tweets, which we should perhaps be grateful for. Does this latest story mean that MPs will now be on high alert and instructing their staff, family and friends to look again at their social media profiles going back many years?  I fear this would be an outrageous waste of time and tax payers money, but with the threat of media interest it may be a disappointing necessity.

The news sparked a wider conversation around the divide between personal and private lives, with LBC running its own online poll asking the question, Should you be held responsible by your employer for what you post on social media?  The results, so far, make for interesting reading.

You may have been reminded of the story of Paris Brown, the much publicised Kent Youth Police Commissioner. In strikingly similar circumstances, the Daily Mail published some of Ms Brown’s tweets going back several years, some from when she was only 13 years old. Although the Kent Police Commissioner stood by her, the pressure became too great for her young colleague and she resigned after only a few days in the post.

As ever, the importance of social media policies and guidance cannot be underestimated. If you would like any assistance in preparing your policies or advice if considering disciplining an employee, please get in touch.