He may have trended worldwide and have been labelled an overnight ‘Twitter champ’, but could Danny Willett’s school teacher brother, Peter (PJ), be disciplined for his entertaining online commentary?

Whilst his brother was winning the Masters, becoming the first European champion in 17 years, PJ was live-tweeting reactions from his living room in Sheffield. As the ‘action’ continued into the night, the quality of the tweets became more questionable, complimenting his brother on his ‘massive bollocks’ and celebrating the win by apparently downing a bottle of champagne.

But it was his comments about school and his plans for the following day that may bring about a swift end to his celebrations.

Tweeting to his rapidly increased 15,800 followers (at the time of writing) and much of the world’s media, the teacher had the foresight to acknowledge that he may not be in the best frame of mind to teach on Monday morning, but also provided an insight into his life in class.

The immediate popularity of the teacher also drew some interesting comments the following morning, when PJ was seemingly inundated with requests from the media to revel in his new found celebrity, such as the one from user Sam Keyworth below: 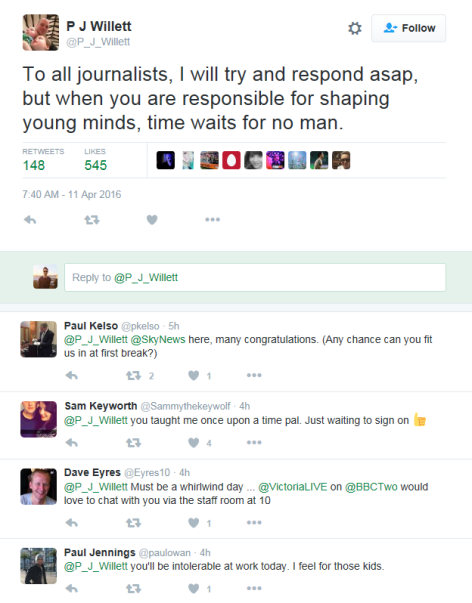 Of course, we should all be able to celebrate the success of family and friends, as well as our own achievements, but the line between our personal and professional lives is ever present.  The recent story about an apprentice teaching assistant being dismissed from a school for posting images on her personal Facebook profile led to claims of double standards when male model Pietro Boselli was himself celebrated for provocative images posted to social media whilst lecturing at UCL.  Here again, there is a risk of an employer treating staff differently not necessarily because of their sex (or their celebrity), but because of an association, in this case with a celebrity sportsman.

What action is taken by the school against PJ, if any, is yet to be seen. For the time being, the school may be basking in the attention he is receiving, making time for him to appear on various news outlets, but if a parent was to raise any complaint or the school considered the potential for any detrimental impact on its reputation, its policy may soon change.

Of course, its essential for any employer to properly investigate any complaints it receives or where there may be misconduct. Where social media is concerned, the starting point is always the relevant policy. For teachers, the standards expected are likely to be higher than in other jobs or professions. It is also essential to apply any policy fairly and equally across all employees.  For more information about having the right policy for your organisation (and other news stories), listen to my Talking Social Media podcast with Krishna De, available here.

PS. I should declare that I have no association with any other golfer, in spite of the name.