Katy Perry, the most followed celebrity on Twitter, suffered an awkward moment when her account was allegedly hacked this week. Posts made from the account in the ten minute window included a tweet directed at Taylor Swift, with whom Perry has had an apparent spat with since 2013.  Other posts, assumed by many to have been made by Romanian user @sw4ylol, included homophobic and racist terms.

The tweets may have been identified by many of Perry’s 89 million followers as out of character for the Fireworks singer, but nonetheless, they have the potential to negatively impact on Perry’s reputation and relationship with fans.

A further attack was focused on Perry’s SoundCloud page, where a previously unreleased track, Witness 1.3, was made available. The hacker later posted a take down notice from SoundCloud (below). The track was then removed. 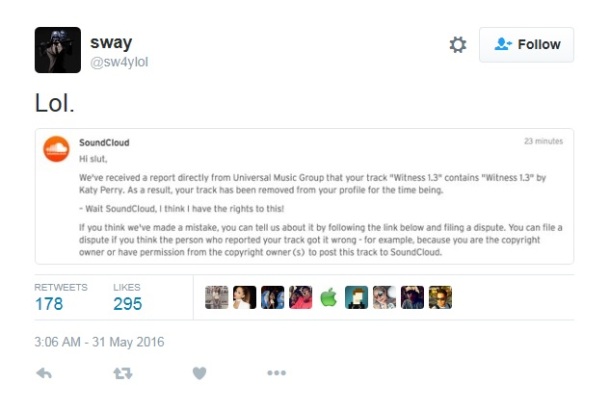 This high profile attack, although not directly costly or especially damaging in the long term, should serve as an important warning to all social media and internet users.  Although unconfirmed, it is more than possible that like many of us, Katy Perry uses the same or similar passwords for all her social media or online accounts.  Once one platform is breached, there is a very real risk that the hacker will access the others (or already has done).

Security measure can be a bind, especially any two-step verification process, but they are there to protect the user. It is important to find the right balance between privacy and ease of use. Several passwords on rotation, each suitably complex, avoiding more obvious names of pets and other pieces of throwaway information that may be readily available to aspiring hackers is preferable to a single password used for every account.

It is also important to keep your passwords private. Allowing a friend, colleague, family member or even employer access to one account may open up access to your whole online life.

It may be easy to log in to new accounts using your Google+ details, but it is unlikely to be the most secure. If it is more difficult for you, just like locking your front door in the morning, it will be more difficult for a potential hacker.

It may be common sense, but take the time to review your own security and accounts on a regular basis. If you suspect any misuse, change your passwords and report it to the relevant platform or provider.