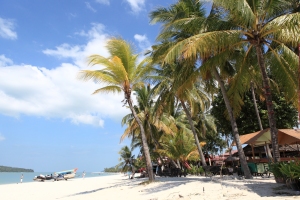 It hasn’t exactly been a slow news week, but that hasn’t stopped the story of Paul Marshallsea making the headlines. Again. You may recall that Mr Marshallsea became an overnight hero after grappling with a shark in Australia whilst on holiday, saving a group of children swimming nearby. But rather than receiving a hero’s welcome on his return to Merthyr Tydfil, he received his P45.

Mr Marshallsea and his wife, Wendy, were both employees of the Pant and Dowlais Boys and Girls Club, but were dismissed from their roles on their return. It turned out that whilst soaking up the sun and the limelight in Australia, both were supposed to be on sick leave from the charity.

The letter of dismissal is reported to have stated: “Whilst unfit to work you were well enough to travel to Australia and, according to recent news footage of yourself in Queensland, you allegedly grabbed a shark by the tail and narrowly missed being bitten by quickly jumping out of the way.

“The photographs and footage appeared in newspapers and television broadcasts. The breakdown of the trustees’ confidence and trust in you and your ability to perform the role is so great that we find that dismissal is the only course of action we can recommend.”

This may sound perfectly reasonable and quite fair, given that Mr Marshallsea was effectively caught out by his 15 minutes of fame, but the reasons that allegedly led to the sick leave may be significant. Both charity workers claim to have been close to breakdown, working 7 days a week and advised by their doctor to take a holiday. Whether the doctor meant a holiday from work, or a trip to the other side of the world is not known, but regardless, it is easy to see why the pair’s absence was then treated with suspicion.

In these circumstances, it is easy for an employer to jump to conclusions, however obvious those conclusions might seem. Stress in particular does not necessarily manifest itself with physical symptoms. Treatment of stress might range from tablets, to exercise or more holistic suggestions, maybe even holidays. It is the responsibility of any employer to properly investigate any alleged misconduct before making any decisions about an employee’s continuing employment or dismissal.

That is not to say that other factors cannot be taken into account. An employer must be seen to act fairly and at times robustly in enforcing its policies. If employees on sick leave post photos of themselves on social media sites at a theme park, on a beach or – as in the present case – wrestling sharks, it can leave a bad taste amongst their colleagues and the situation may warrant further investigation and, possibly, further action.

The ‘fin’ end of the wedge

Employees on sickness absence don’t have to be confined to their beds or prevented from shopping for food in the local supermarket, but an employer should follow a fair and reasonable procedure before taking any disciplinary action. In cases of sickness absence, a medical report with the employee’s consent should tell an employer what it must know before taking further action. After all factors are considered and the employee has been given an opportunity to respond to the allegations, dismissal may be a reasonable outcome, but the foundations should be set first.

The Charity may have been correct to be suspicious of its employees falling ill at the same time and holidaying together, not least because they are married. Whether the Marshallseas made any complaint of long hours before their absence may also be a key consideration, possibly contributing to a claim of unfair dismissal, disability discrimination or even personal injury for which their employers may be liable.

We might not know all the facts of this case, but employers wanting to avoid the public eye, wanton speculation and potential reputational damage will be advised to follow a fair procedure and think twice before making any hasty decisions.

Regardless, for the time being, Mr Marshallsea is unemployed and as he correctly points out: “There’s not much call for shark-wrestlers in Merthyr Tydfil”

If you have any queries arising out of the issues discussed above, please contact me here