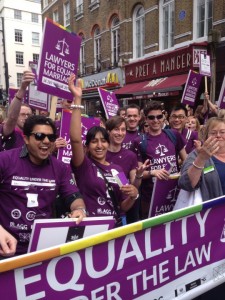 PODCAST – Is being gay an advantage in the legal profession?

I recently spoke with some fellow LGBT lawyers at an event  where BBC presenter Evan Davis had just given a talk in which he claimed that being gay “has made me more interesting than I would otherwise be, [and] in that sense, it has been a slight advantage for my career.”

I thought this was an interesting observation and discussed it with Lewis Silkin duo Geraint Lloyd-Taylor and Hester Briant and former City solicitor Carl Soan to see how they felt about Evan’s suggestion.  We also considered if being gay might help you professionally to forge and succeed in a legal career and agreed with Evan’s  comment that it is “easier at work if you are not having a hidden life”.

On the eve of Legal Pride 2013, listen to us chatting about this and frankly sharing our experiences of the sometimes tricky political environment of City law firms.

Listen to the podcast on Legal Cheek