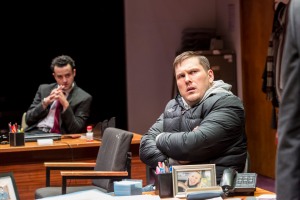 It may have been ten years since I completed my training contract and last worked in a high street firm, but as I took my seat at the Donmar Warehouse theatre recently, all too many memories came rushing back.

As soon as I entered, the vast set stood proud in familiar shades of magnolia and teak veneer. Carpet tiles covered the stage floor and fluorescent lights suppressed the ambition of the cast from above. I could only assume there was no natural light in this imagined office space and that the only air circulation came from a temperamental desk fan and seldom used entrance door off the main street. The attention to detail was exquisite, even down to the current year wall planner (sponsored, of course, by another popular weekly legal journal).

The play was ‘The Same Deep Water As Me’ and the first act takes place in the single office of a struggling personal injury firm in Luton. The firm has only two lawyers, but a willingness to succeed in spite of difficulties that are obvious from the start. The firm could be anywhere and the premise, at least, could be true of many high street firms. Times are hard, work is down to a trickle. But then a solution presents itself in the form of a childhood friend with a fraudulent whiplash claim against a Tesco van. “Whatever happened to ‘every little helps’?”

The relationship between the two lawyers is quickly developed along with the plot, with occasional breaks for trips to Greggs. The senior lawyer has at least one eye to professional conduct, while the other eye is blind to the firm’s few, suspicious clients. He is clear, at least in his own mind, that his firm is reputable and not one litigating over ‘bursting boobs’.

The other lawyer, played with relish by Daniel Mays, is a Luton boy who has failed to make his mark in London’s legal heartland. His desperation to succeed (and to make money) back on home territory may occasionally confuse him with an estate agent keen to make a sale, but with that air of lazy arrogance which beleaguers second rate   salesmen. He knowingly forms  a merry band of misfits and prepares a risk-free ‘crash for cash’ scenario where no one  gets hurt apart from the insurance company.

The second act presents a change of scene and the courtroom battle between the big brand and the little man, only this time round, the audience isn’t rooting for the underdog. As with the office scene, the courtroom is almost too realistic, even down to the water jug that doesn’t pour straight. The David and Goliath battle is perfectly summed up in the caramel frappuccino of Tesco’s ‘ball-breaking’ barrister and the Greggs coffee of the claimant’s underprepared  legal team.

As the play continued, I couldn’t help but think that the writer, Nick Payne, had fallen asleep one weekday morning and subconsciously soaked up the TV output: Jeremy Kyle, Judge Judy and the many ‘have you had an accident in the last three years?’ advertisements are melded together to present a crude snapshot of the public perception of lawyers and law firms at the start of the 21st century. A sad reflection of the lengths people (and lawyers) will go to for some extra cash (after all, how long does a broken leg stay broken for) and the perception of the legal system. The web of lies and lives that are intertwined and reluctantly recited in real life cases make for compelling and entertaining viewing, but present a (fortunately) warped view of life in the law. At least it is a view that I am not familiar with from my career thus far and one that I hope not to be part of in the years to come.