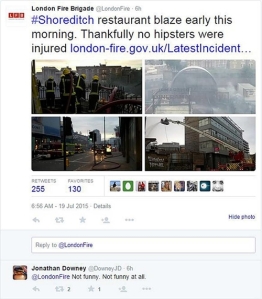 Over the weekend, the London Fire Brigade (LFB) Twitter account was criticised for making light of a serious blaze which caused damage to a number of properties in the Shoreditch area of the capital.

LFB have been great users of social media, using it as a valuable tool for communicating with the public and providing advice on fire safety. The service will often post photos and engage with the local community to raise awareness of incidents and avoid further spread of damage, injury and disruption.

However, sometimes those with responsibility for posting on behalf of organisations can get carried away or make the occasional mistake. There is always the possibility of human error or infallibility.

The tweet, which read, “#Shoreditch restaurant blaze early this morning. Thankfully no hipsters were injured” and went out to LFB’s 100,000 followers, received some criticism, with complainants suggesting it was unprofessional and not funny. But this is all down to taste. Offence is of course subjective, but when running a social media account for any organisation, it is important to retain the principles and values of the organisation whilst engaging with the wider community.

Is this a twitterstorm in a tea-cup? Of course it is. LFB responded quickly, apologising for any offence caused and would have repaired the relationship with any distressed followers easily.

‘Sorry if we caused any offence by using the term hipsters. Hope Shoreditch businesses are back on their feet soon.’

There is an important lesson for any organisation which comes under fire for making a poorly received comment: social media is as much about listening as it is about broadcasting. By responding quickly and proportionately, any lasting damage can often, if not always, be avoided. By training and monitoring those who are responsible for the output, the chances of it going awry in the first place will be minimised.